skip to main | skip to sidebar

Peter is a published writer and a PhD student at the Centre for Anthropology and Mind in Oxford, supervised by Harvey Whitehouse. He just gave an excellent talk on his PhD research in the Marshall Islands, which focuses on islanders' perceptions of climate change and the risks associated with it. This group of tiny corall atolls in Micronesia have a maximum elevation of 32ft and a mean elevation of only 7ft, so they are right in the front line of rising sea levels.


Peter has taken  a mixed-methods approach, using interviews, quantitative attitude surveys, and a little bit of participant observation (on scientific expeditions and in educational sessions). His main conclusion is that discourse about climate change fits in well with a more widespread Marshall Islander belief in cultural entropy: a general socio-cultural decline. Although he found that climate change may be as high as #3 on the list of concerns that people have about the future, they tended to be more worried about economic hardship and a decline in lifestyles and social mores. 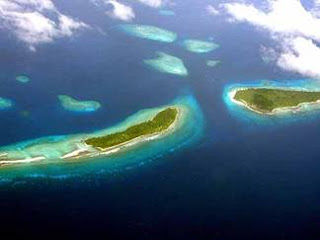 Source: http://www.gseii.org/islands/marshall-islands.html
Not surprisingly, the oldest age group were more likely to report noticing the effects of climate change, as they have had more time to notice it; but cleverly, Peter pointed out that this demonstrates that people are not just parroting media accounts of climate change, but are integrating it with their own local environmental awareness (a process that Lazrus, 2009, calls triangulation). On the other hand, awareness of the scientific concepts involved also drives people's reports of local climate change. He argues that the idea of global warming should be studied alongside local beliefs, as it has now entered their culture.

Another layer of triangulation occurs in the integration of both scientific and local beliefs with Biblical narratives - particularly the Flood myth from Genesis and the prophecy of destruction by fire from Revelation. Peter drew a neat contrast between the islanders' attitudes to scientists, who are seen as giving a clear message on climate change but are not necessarily to be trusted, and their attitudes to God, who is to be trusted implicitly but whose "message" on climate change is unclear.

One of the central problems of Peter's research was to work out why islanders tend to blame themselves for climate change. Wouldn't it be more natural to blame America (as not only the biggest polluter in the World, but also a former colonial power in the Marshall Islands)? He argues that self-blame ties in with a kind of "original sin" narrative, in which islanders blame themselves for being tempted into adopting elements of a corrupt and destructive foreign culture, abandoning the harmonious traditional culture which has recently been popping up in idealised form in street murals. It also reflects the rhetorical strategy of the MI government, who have been emphasising what people can do to combat the short-term effects of climate change themselves, rather than encouraging them to blame other countries and focusing on a perhaps inevitable long-term catastrophe. Finally, there is a resonance with the Marshall Islanders' complex attitudes towards the USA, which they see as a bit like a traditional chief who demands sacrifices but also confers benefits and provides protection.

All in all a fascinating and very clear talk with a wealth of information!